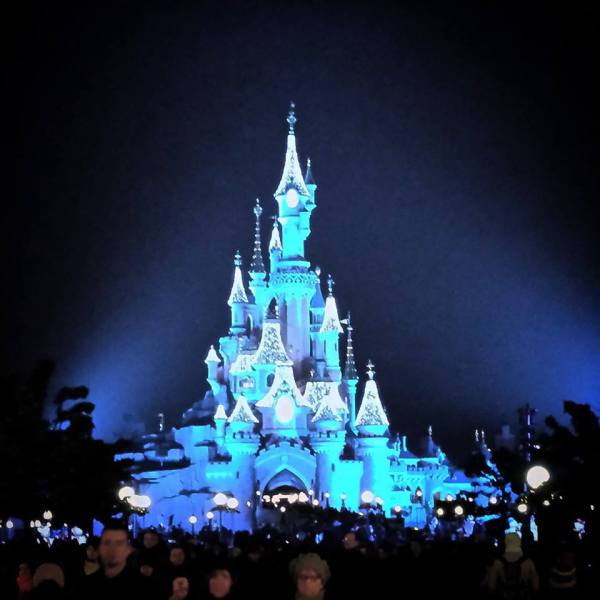 Why Disneyland Paris needs a sprinkle of pixie dust

Having recenlty returned from a Christmas family trip to Disneyland Paris, it was no surprise to read that the theme park had been reported to have received a €1 billion bail out a few months ago.
Don’t get me wrong, we had a great few days away and there is, without doubt, a magical feeling you get when you walk through the entrance, which is still the case for my 17 and 14 year old too.  However, the park looks tired and clearly shows a lack of investment and it’s therefore no suprise to read that it’s been losing money for years.
I can’t pretend to know how to run a theme park, nor do I have any idea of the cost of building rides and maintaining them, but here are my ten very simple observations as to where that huge investment could be spent to help restore my faith in the Magic Kingdom.

In Discoveryland you will find what’s described as ‘A fantastic 3D film relating the adventures of Captain EO, alias Michael Jackson, featuring a rhythm-packed musical soundtrack and a whole host of dazzling special effects’

This film was made in 1986.   At the time, it was the most expensive film ever produced on a per-minute basis, averaging out at $1.76 million per minute and starred the biggest pop sensation directed by the guy that brought us Star Wars.  It didn’t get any better.  But what does that mean to kids of today? Michael Jackson sadly passed away over five years ago now and I understand the reasons that this attraction was brought back to the park as a tribute to him, but it’s time to move it on.  The film couldn’t look more dated and the ‘dazzling special effects’ look so basic compared to what we’ve come to expect with films such as Avatar and Gravity its almost embarrassing to watch.

Wandering around the park are of course the famous five of Mickey, Minnie, Donald, Goofy and Pluto but you’ll also spot the likes of Chip & Dale and … Mr Smee.  Where are the new heroes like Olaf, the snowman who stole the show in Frozen?  Disney need to stop living in the past.  The choice of characters you can meet still seems to be based on the ‘trying to live your childhood through your kids’ theory.

I get that Pirates of the Caribbean was a ride before it was a blockbuster film, but would most kids going to the park know that?  So when you get to the ride, it makes no sense to me and must surely be huge disappointment to many not to see any reference to Captain Jack Sparrow.  Time to have a facelift.

‘You can save time with Fastpass’, except that when you read your small print, ‘you may only have one Fastpass ticket at a time’ and despite Disney Hotel guests being able to enter the parks early, the Fastpass machines don’t open until 10am.  So choose wisely which one you want, because within minutes you are already only able to get into that ride say about an hour later.  By the time you have then used your Fastpass, the next one you try to use isn’t available until about 2-3pm, after which you’ll be lucky to get another one.  The system simply doesn’t work

Disneyland Paris has had over 14.2m visits in 2014, and almost every one of those must have been taking photos just as we were. So with the amount of pictures that were no doubt being uploaded to social media, the park could be trending online pretty much every day if they simply offered free wifi throughout it, which is not currently available, and perhaps ran competitions encouraging you to tag your photos with a hashtag where the best photos won Disney related prizes.

Far be it from me to tell Disney how to sell product, but I do find it odd that you come off a ride, say in Fantasyland, such as Pinocchio, and in the store you can buy a Lilo and Stitch toy.  I may have a vested interest in this one as my favourite Disney character is Figaro, Mister Geppeto’s cat.  I know, an odd choice out of all the characters there have ever been. But my point is, would there not be more chance of selling more product if, when you finished the ride you could perhaps buy a bigger selection of toys from that particular film?  After all, there are stores all over the two parks and in the Disney Village area where you can buy all the other stuff.   FYI, there was no Figaro on sale, and surprisingly, neither could we find a cuddly Olaf.

Guests of the Disney Hotels benefit from being allowed into the park earlier than the general public, which is great, if all the rides were open.  But they are not.  For example, we made a bee-line for the Rock ‘n’ Roller Coaster in Walt Disney Studios, but that didn’t open until 10am, so instead made the long walk back to the main park to go on Space Mountain, except that ride had ‘technical problems’ and was therefore closed at the time.  Unlucky I guess, so instead we went to the Buzz Lightyear Laser Blast, but by 9.30am, it was already at a 30min queue, and of course you couldn’t use a FastPass at it was too early!  Open all the rides and make it a true benefit to the guests to get up early.

Disney paid over $4bn for LucasFilm, so I get that it wants to see an ROI out of Star Wars.  But still having the original Star Tours simulator, which like the Captain EO film, is almost 30 years old, is just simply not worth queuing for, when your time can be better spent on amazing new and original rides like Ratatouille, which opened earlied this year.  Star Wars also seems an odd choice to show on the screens in the Videopolis area which, despite having a stage, had no live show on it.  Instead, across the screens they were showing clips from the animated series Star Wars Rebels.  This seemed strange, especially at Christmas time.  Surely kids would prefer to see the songs of Frozen playing whilst they are having their lunch, or something from Mickey’s Christmas Carol.  I don’t have the stats, and haven’t done the research, but I can’t believe too many kids under 10 would get excited by Star Wars Rebels whilst at Disney.

We were lucky in that the longest queue we had was 45mins, but the timing of many queues were shown as 70 minutes or more.  So how hard can it be to make that time pass a little faster by giving something for you to do whilst standing in the freezing December cold.  The impressive ‘Crush’s Coaster’ ride did get it right by offering a local wifi link enabling you to download a game onto your smartphone, which certainly helps.  So why can’t they do something similar on all the rides, or why not have screens above the queues showing scenes from the films, or the characters walking along the queue giving the kids a chance to take a selfie with Snow White, for example.  How difficult could that last one be?

And finally, when you do crash out in your room, why not offer the chance to watch a Disney movie of your choice on your TV.  I’ve never understood why, in this age of Netflix, which does indeed have Disney films on it menu, why the Disney Hotels don’t offer an on-demand service of all the films available to show.

So there you have it.  My 10 simple marketing tips (and I had plenty more) for the people at Disneyland Paris on where to start spending their billion Euros.
In summary, as I said, we had a great time away, but perhaps Disney need to take a leaf out of their own song that has driven just about everyone mad in 2014 and that I can’t get out of my head since returning from my trip: