As we end another record year at Audere, I wanted to thank our clients, partners and everyone who has supported us in 2022.

I’m extremely proud of the work that’s been delivered from my amazing colleagues who prove every day just how effective and efficient we can be working remotely.  I’m so lucky to work with a group that have so much enthusiasm and passion for what we do.

We’ve grown the team this year, extended our relationships with existing clients and won new ones.  We’ve recorded remote podcasts with guests from all over the world, and as conferences opened up again, our event offering took us to Amsterdam and Las Vegas.

Here are just some of the highlights …

At the start of the year, we produced our second remote video podcast for Marie Dreumont & Stephen Douglas at McDonald’s, helping showcase the ‘A Touch of Archery’ design to their franchisee network.  Guests joined from two restaurants that had implemented the new design, in Mexico and Australia.  This was followed up with an internal communications crowdsourced video project.

Recording online for McDonald’s with guests in Mexico and Australia

We’ve continued to record our series of interviews with leaders of Unicorn companies in partnership with Tyto, adding 10 new episodes in partnership with our c-suite podcast, featuring ELMS, InFarm, Verbit, Chargebee, Seismic, Highspot, Exotec, Mollie, Chainalysis and Tealium.  We took a break at the end of the year as co-host for these episodes, Tyto’s Holly Justice, went on maternity leave (congrats Holly on the birth of Nova!), but we’ll be back with more episodes in the new year.

During February, March and April we welcomed back the British Business Bank to the c-suite podcast as we recorded a show about how small businesses can get to NetZero, and later in the year we delivered a podcast workshop for their team.  We also recorded new episodes of ‘Everyone has a story’ for Compass Pathways and began work on new shows for BVCA, Oxera, Merck, FutureBrand and Havas Life Medicom as well as filming an internal comms video for a new client, LifeArc.

From May, we produced the first ten episodes of another new podcast series for another new client, Third Bridge.

We then finally got to meet in person with our brilliant clients from Refinitiv, part of LSEG (who were over from the US), when we recorded in person with the Lord Mayor of London at Mansion House, and at Paternoster Square for their Sustainability Growth podcast, plus we helped launch a new series with the release of the Hedge Fund Huddle. 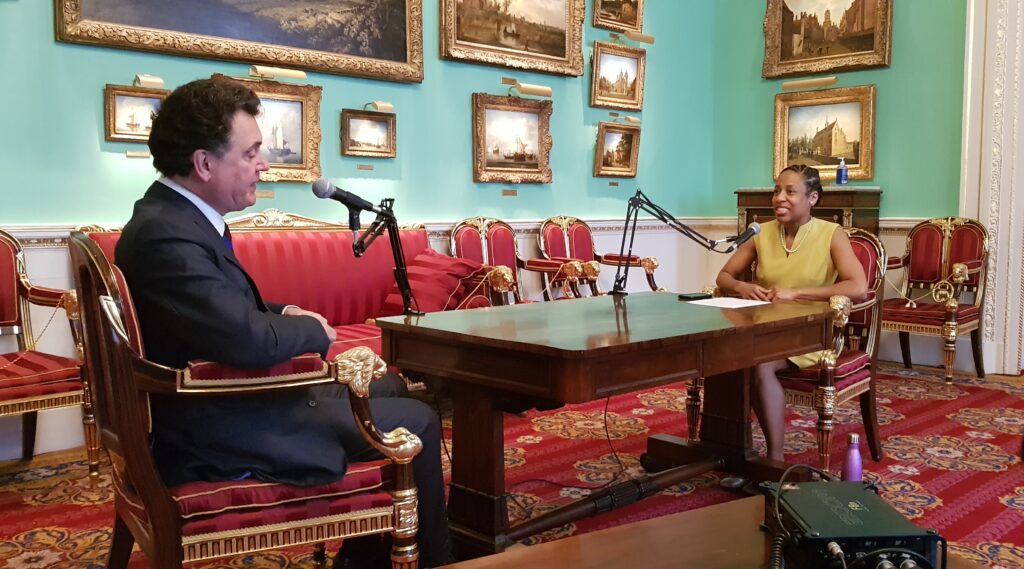 recording with the Lord Mayor of London

Our relationship with SAP has gone from strength to strength, whilst growing our name within the wider SAP ecosystem, launching Season 3 of Eden Talks for Edenhouse, part of Accenture, and starting work with AWS on a new SAP related series.  For SAP themselves, we’ve released Season 2 of REGEN.  We completed the first season of Marketing Futures, bringing to life a series of reports around retail marketing ecommerce and MarTech that we produced in partnership with our c-suite podcast, and have produced video case studies with their partners throughout the year. 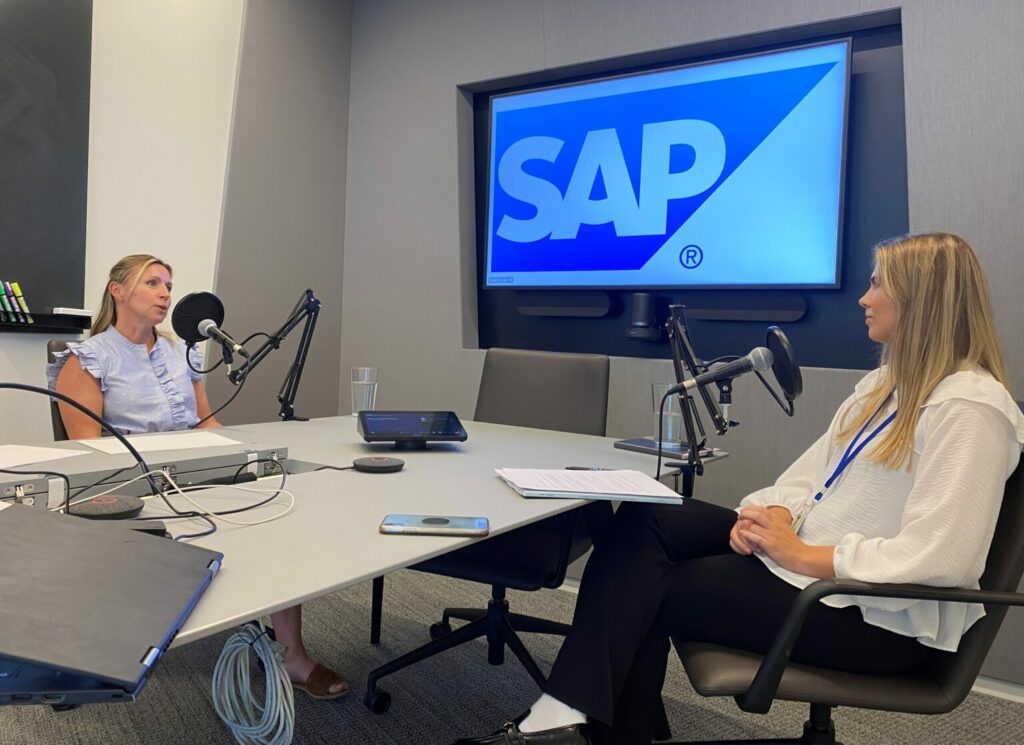 In June we started working with Banking Circle, and took our c-suite podcast to Money20/20 Amsterdam to record the show on their booth.  The activity proved such a success, they repeated the exercise in October at Money20/20 USA in Las Vegas and our client, Miranda McLean, has provided us with the most wonderful testimonial for our case study.

Romy, Leon and Russ at Money20/20 Las Vegas (they were working, honest!)

In August we began planning a new video podcast series for Newcross Healthcare and have since filmed the first 14 episodes of Voices of Care.

As we reached the end of the year, we worked on projects for more new clients – Freshfields – and then we recorded at yet another Fintech event, this time for Freemarket at Fintech Connect in London. 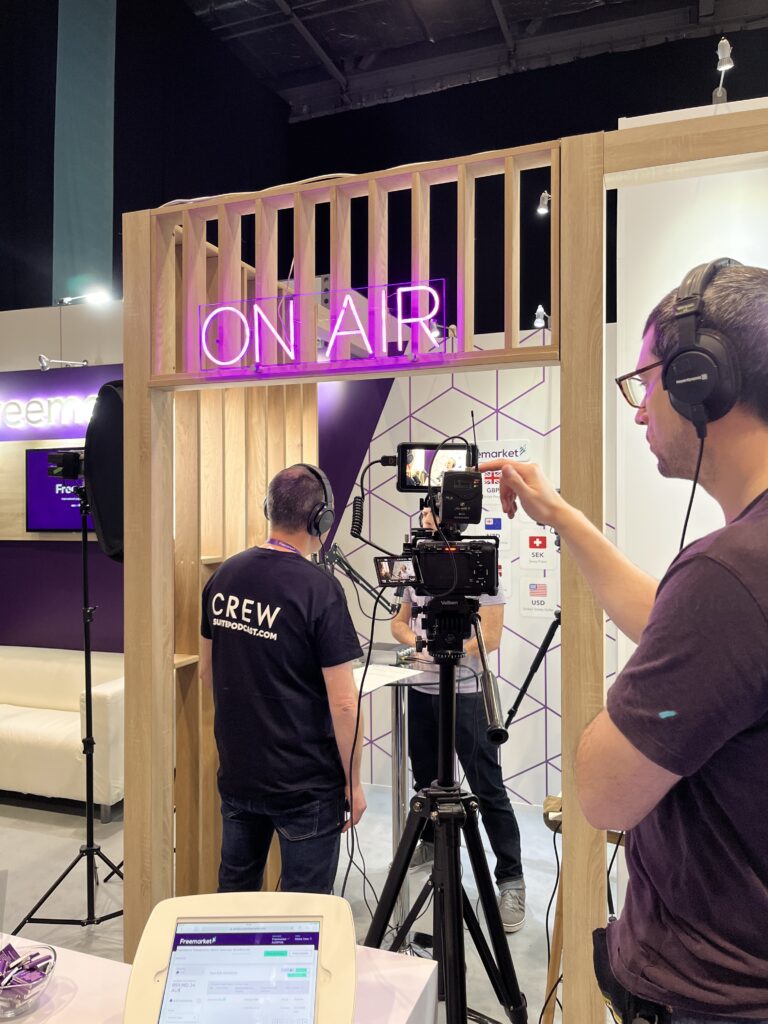 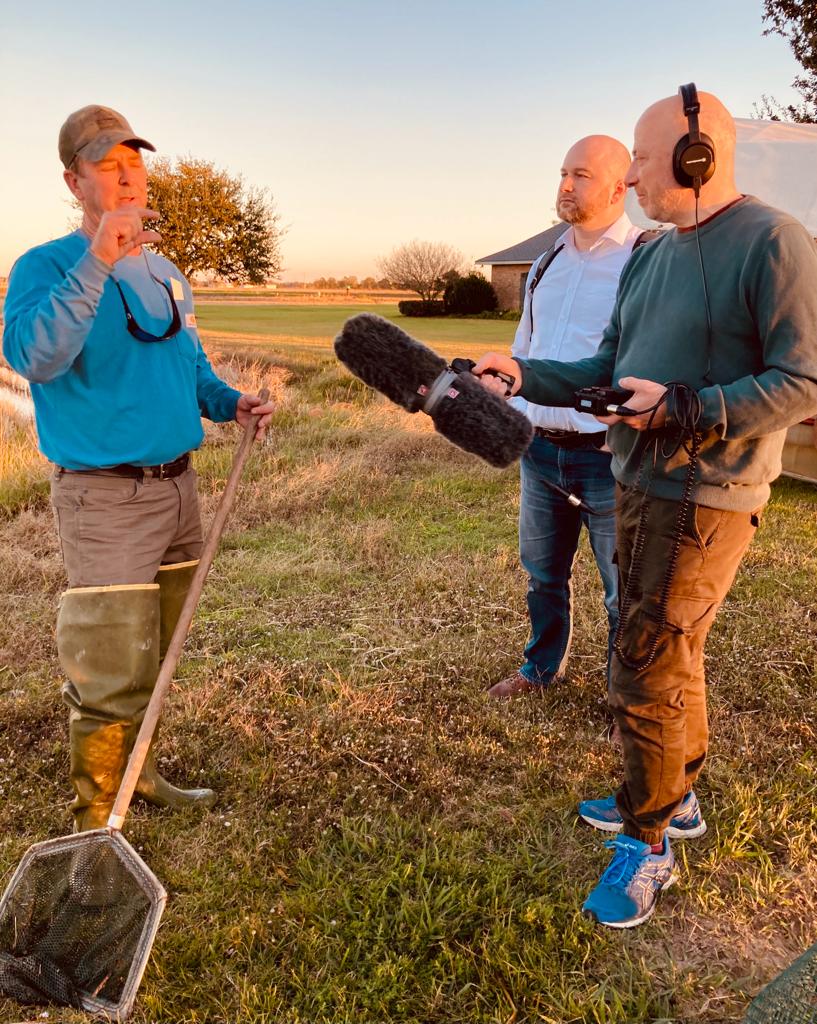 Russ recording on locations in Louisiana

As we finished the year, we launched rebrands for both Audere and the c-suite podcast thanks to the team at Creative Client.

It’s been pretty busy! Apologies and thanks to anyone I missed out.

Merry Christmas, Happy Hanukah, enjoy any other festivities I’ve forgotten to mention and best of luck for 2023! 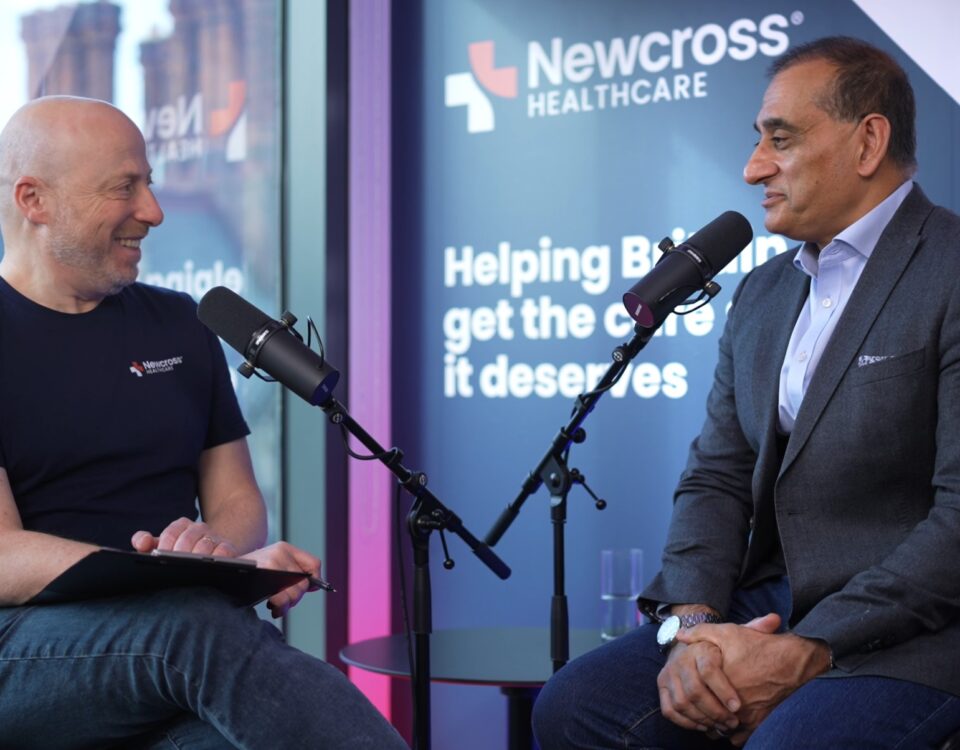 Using video podcasts to engage with the senior policymakers, regulators, and providers within the health and social care sectors 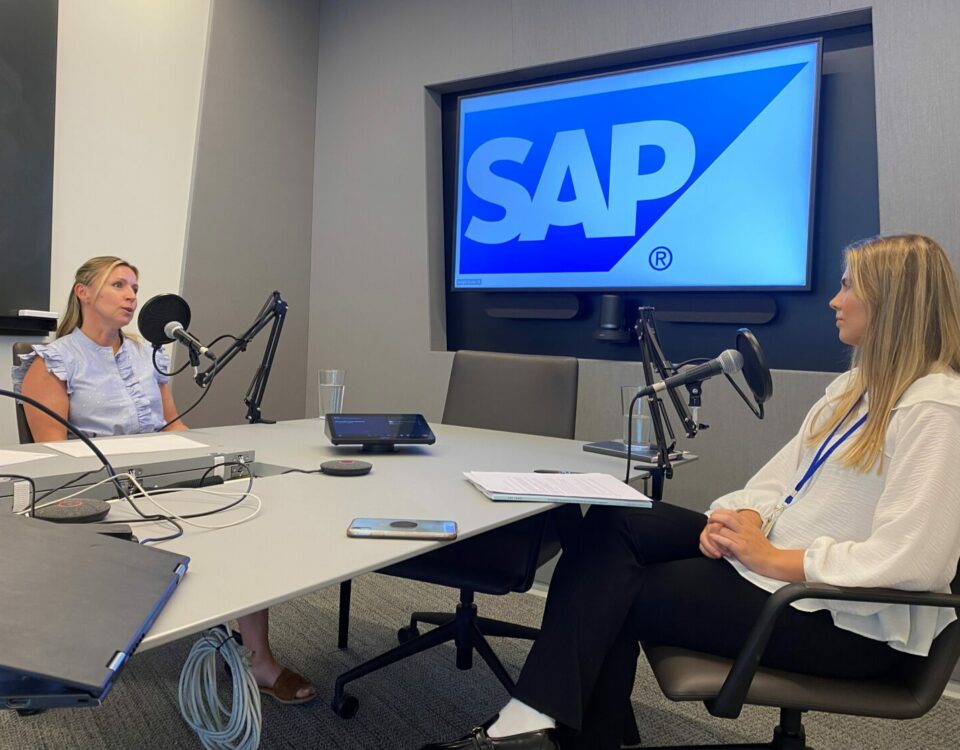 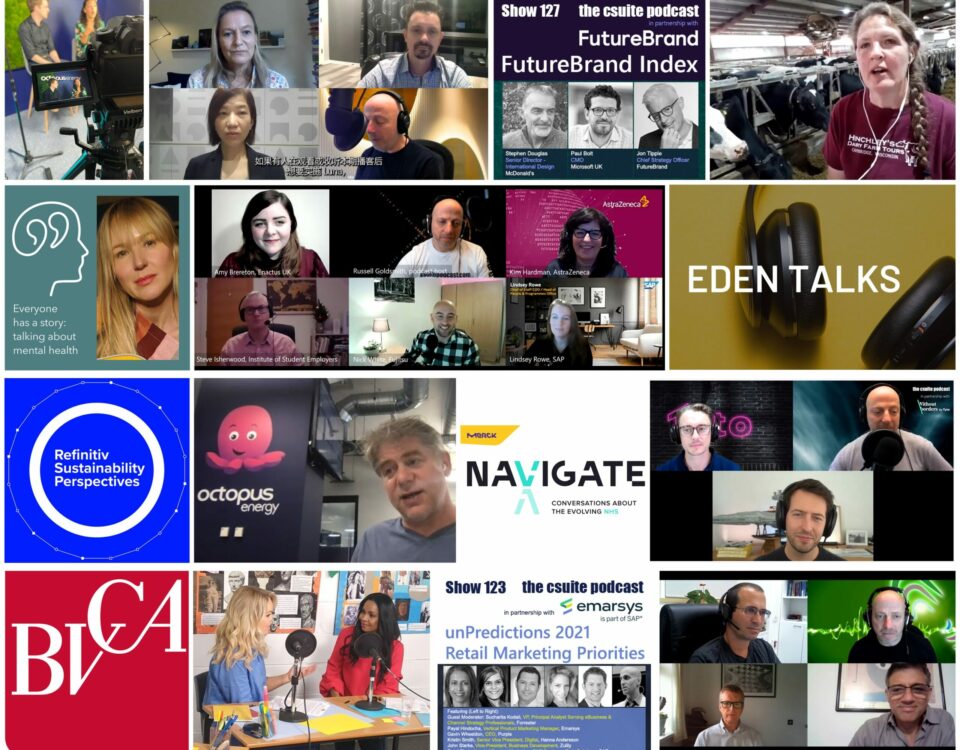